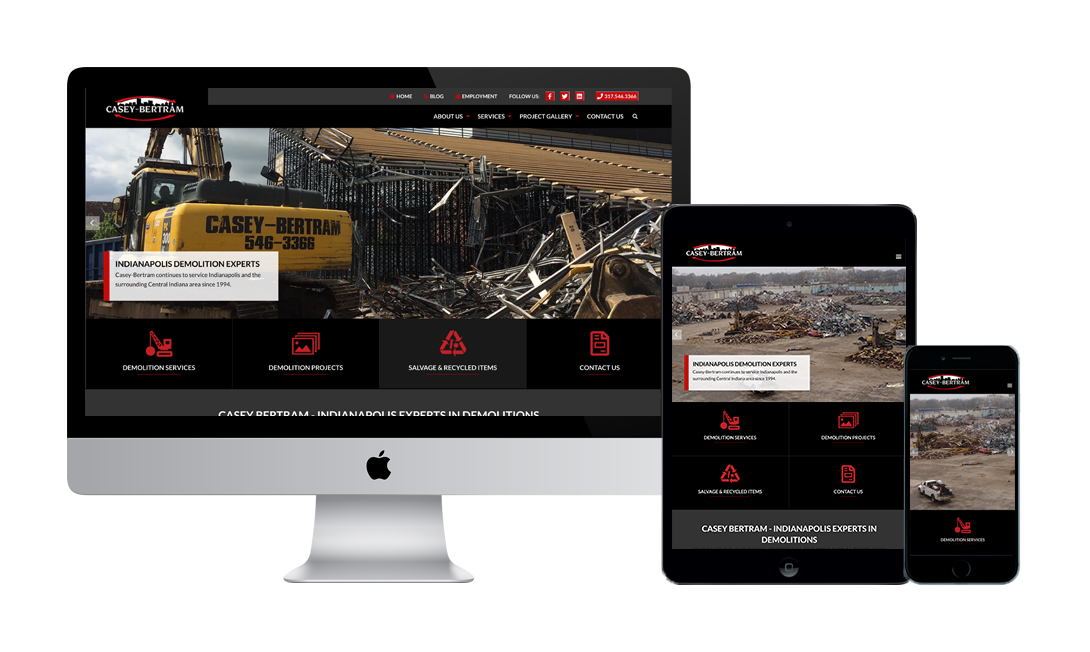 Casey-Bertram approached Marketpath about creating a new, dynamic website that better defined their company brand and offerings. Their previous website was created about seven years earlier and featured none of the functionality that a modern day site required. Casey-Bertram needed a site that clearly highlighted the organization's extensive demolition experience and breadth of service offerings. After meeting with Scott and Rodney, Marketpath was able to easily identify core features that would vastly improve the company's online perception and create future opportunities to attract new business.

Besides the development and design of a new modern looking site, Casey-Bertram needed a partner that would optimize their presence among search engines. Despite being one of the premier demolition companies in the state, Casey-Bertram was buried deep in most Google search results for the keywords of highest importance. The company needed a partner that would improve their online profile.

SOLUTION:
The focus of the new site was on three core markets: commercial demolition, industrial demolition, and residential demolition. Marketpath proposed a design that would highlight these distinct verticals while adding features that boldly announced the company's extensive history.

Casey-Bertram has been extremely please with the new site, and the feedback they've received from customers has been universally positive. But the most noteworthy improvement has been the increase in Google keyword rankings since launch. As a result, potential customers are finding the company more frequently, which has led to an increase in leads and revenue opportunities.

A keyword report was run prior to the site's launch in October 2012 and again in April 2013. In October, Casey-Bertram could be found on Page 1 of Google for local keywords just once; as of April, that number had jumped to 12. the company couldn't even be found in one of hte top three positions for local keywords in October; in April the company appeared eight times, including five times at number one.

Project Gallery — To demonstrate and provide proof of the company’s impressive demolition experience, a comprehensive gallery featuring hundreds of images, as well as project descriptions, was created.

Demolition Blog — Casey-Bertram's old site wasn’t optimized for content marketing. On the new site, Marketpath added a blog and trained Casey-Bertram employees on how to write content that would promote SEO, while also positioning the company as experts in the demolition field.

Salvage Store — An additional feature built by Marketpath was the Salvage Store, a portal to allow Indianapolis contractors and consumers to purchase recycled products from demolition sites. As part of the company's eco-friendly position, the store offers great deals on several items, including air conditioner units, hot water heaters, electrical transformers, and even brass doors.

“The new Casey-Bertram site does a fantastic job of increasing the company's credibility and fully highlighting the organization's full range of capabilities.”